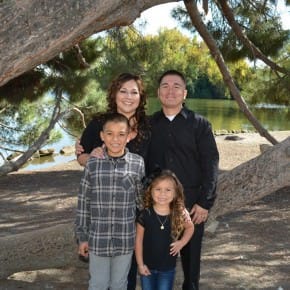 At 31-years old, Sergio Calvillo knew the 13-year gap between classes was going to hurt. Classmates in his Surgical Technology program “were fresh out of high school and zipping along,” he says, while he wrestled with being a student again. “Being back into academics was a real struggle for me,” he says.

Sergio knew he had to buckle down if he wanted to break out of the Auto Body industry in which he’d spent most of his life, earning a living for his family. When he was laid off the second time, he knew he had to make his move.

“The Surgical Tech program in Fresno grabbed my attention,” he says.

It was a difficult balancing act. His wife, Evelyn, and children Dominic and Emma had to do a lot of their usual ‘family things’ without him. Sergio admits to feeling pretty neglectful during those months he was in school, when he was regularly pulled away from his kids’ school, sports and family events.

“I did a lot of my studying while everyone else was sleeping,” he says, and still managed to make the Dean’s List every quarter; a “pretty big deal” for a guy who scrambled to stay up with the just-graduated-high-school ‘zippers’.

Evelyn works full-time as a Pharmacy Technician, so they had to juggle child care, along with work and school schedules. It was important to Sergio that his kids saw their effort and got the message of the importance of an education.

“If I can show them that I can still do it – that, at 31, Dad can go back to school and finish it, maybe they will understand,” says Sergio.

Now all of their parenting lessons and shared sacrifice have finally paid off. After graduating Nov. 29th, two job offers “have landed in my lap”, says Sergio.

“I am so blessed to get a job right after graduation,” he says. If all goes smoothly, Sergio begins orientation at Clovis Community Hospital on Dec. 17th and the Calvillos will begin to breathe a little easier.