Respiratory Therapy program is the perfect fit for military veteran 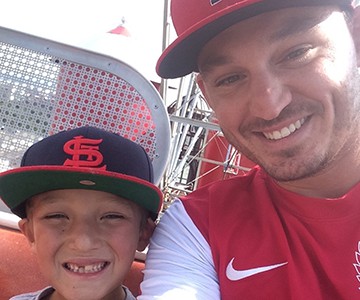 Everything about Adam Moniz’s 14 years in the Marine Corps was hands-on. His Military Occupational Specialty (MOS) as a combat instructor was demonstrating infantry weapons and tactics, demolition and rockets.

“I’ve probably taught a couple of thousand foreign nationals how to do those jobs and 1,200 Marine Corps recruits right out of California boot camp,” says Adam, who spent many years honing his skills during three tours in Iraq and deployment to the Middle East and Southeast Asia. “Experience is the best way of being the most effective teacher,” says Adam, who joined the service at 17, just out of high school.

Adam separated from the military early this year with the realization that he needed to be more present in his family’s lives. His fiancée Jennie, and children Maxx, 8, and Stella, almost two, had spent too many unpredictable years without him. It was time to come home.

“I was missing things that I would never be able to re-do,” says Adam. “I wasn’t really around that much for my son, and I want it to be different for my daughter. I want to go with her for her first day of school.”

But what kind of civilian job requires the kind of skills and experiences Adam had perfected over the years? He did not see an easy match. So he started thinking about what he really loved doing and what natural talents he might have to build on.

“I worked with wounded Marines and felt the change that comes from helping people,” says Adam. “Getting to work triage with children was an eye-opening experience that made a big impact and helped me decide what I wanted to do.”

The Respiratory Therapy (RT) program at SJVC’s Temecula campus fit all of Adam’s criteria. His desire to help others would be met, and his hands-on skills were essential to successful training.

“The military tradition of training is one-on-one and very hands-on,” says Adam. “It’s what I’m used to, it’s what I know. I need to experience touching things, running through the motions. It’s the way I learn and RT provides that for me.”

That is not to say that the Respiratory Therapy program is a walk in the park.

“Studying was kind of an eye-opener,” says Adam. “I had been in my comfort zone for 17 years; this was something new and I was starting from scratch.”

Adam has three very important things going for him: First, he has a strong compatibility with hands-on training and a teacher who leans heavily on that skill. “Miss Nawn (instructor) breaks things down for easier understanding, gives me the reason for why I need to know this, and uses real-world experience instead of reading from a book,” says Adam. “The way I teach is the way she teaches.”

Second, Adam has strong support at home. “Jennie holds down the front with the kids,” says Adam. “She is incredibly intelligent and gives her input on things. I’m kind of a hard-headed guy, but her emotional support, telling me I can do it, is probably the biggest thing.”

Third, is the strong role model Adam has in his dad, Dennis. “My dad has been the quiet guy in my life who has been able to get right to the point with me on life, in general,” says Adam. “He says that making people happy is the ultimate gift; keeps you humble. It took me a long time to figure that out, but now I sort of judge my life that way.”

Adam wants to specialize in Neonatal Respiratory Therapy, and eventually teach. “Having my own kids kind of led me to this and is pretty much what my heart is attracted to,” he says.

Adam knows it is a long and arduous road to get there.

“If it was easy, I wouldn’t want to do it,” he laughs. “If I’m not challenged, it won’t keep my attention. I want to go to work happy, come home happy, and if I’m not excited going to work, it’s the wrong career choice.”

It is also very important to Adam to provide for his family. “I want my kids to enjoy the benefits that I can provide for them in ways I couldn’t in the military,” says Adam. “And, they know I’ll be home every night.”

Adam knows you can make yourself happy and take care of others at the same time. “My dad lived his life that way and now I’m on board with that too.”