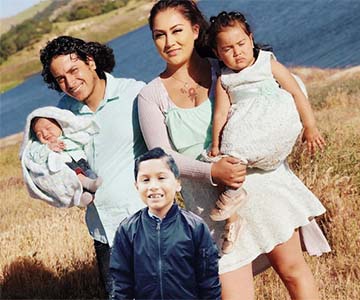 Most of the time when someone finds out they are pregnant, the big decisions get put on hold. The next few months are spent feathering the nest, reducing stress and preparing to welcome a new member of the family. That’s not the way Sujey Marin saw it.

“I knew if I waited, I wouldn’t have gone back to school,” says Sujey. “I would have just wanted to stay home with my son (they had already named the baby-to-be Julio) and go back to cosmetology.” She and her husband Julio already had Leticia (2) and Julio’s son Nathaniel (8) at home. If she was going to make the move to a new career, it had to be now.

Sujey had already taken a couple of swings at career education with almost two years of criminal justice training, as well as cosmetology school, but neither of those occupations satisfied her interests. She had built up a nice clientele of women who came to her to do their hair and makeup, but she had a faraway vision of herself in the medical field that just wouldn’t go away.

When she was just 17 years old, Sujey lost her mom to cancer. All the medical treatments and caregiving she witnessed gave her a glimpse into an occupation in which she might find deeper satisfaction. Sujey knew this was a now-or-never moment. She enrolled in the Clinical Medical Assisting (CMA) program on SJVC’s Atascadero campus and plunged right in.

Monday through Thursdays, her days started at 5:00 a.m. when she began the juggle of schedules that would allow her to be in her classroom seat by 7:15 a.m. She was always there by 7:00. She would be home in time to grab some lunch before meeting her first client in her garage salon, where she would spend the next 3-4 hours. Then it was time to make dinner to enjoy with her family before she retreated to study until bedtime at 11:00.

Her husband watched the kids each night after working long days. “Julio was extremely supportive and would tell me to do whatever I needed to do, but to just stick to it,” says Sujey. “He would even help me study my flash cards.”

Sujey loved the hands-on training of her Clinical Medical Assisting program and felt it was the best way she could learn. But she was surprised at the attention instructors gave their students. “I wasn’t expecting that after the experience I had at beauty college and community college,” she says. “You feel comfortable with them. It’s like you’re at home.”

Her attitude about education shifted into tighter focus. “When you start paying for your own schooling, that’s when you actually realize that it has to be something you really want.”

Sujey thrived in her program, both academically and procedurally. She maintained a high grade-point average and found that she could perform venipunctures (blood draws) and injections without much anxiety. “Because of the way they taught us, we knew what we were doing already. We just hadn’t done it yet.”

It was six weeks before completion of her program, and she had never missed a class – or even been late. One morning she would break her perfect record.

Sujey was sitting in class when she started to feel the familiar contractions that signaled how this day might end. The waves intensified, but she was determined to hold out until noon. “They kept telling me, ‘You need to go to the hospital,’ but I told them I was fine.” Twenty minutes before class was over, Sujey finally let a classmate take her to the hospital. “It was something (leaving early) I never did my whole time in school, and that was because my contractions were strong, and I was in active labor.”

Six hours later, baby Julio made his entrance. The very next week, Sujey chose to be back in school.

She had earned academic recognition and awards along the way and was excited to complete her program with an externship at Aegis Treatment Center where she had already been offered a medical assistant position. The center treats recovering addicts through daily dosages of methadone.

“We start seeing patients every day at 6:00 a.m., and there are always at least 15 people waiting patiently at the door to see the doctor,” says Sujey, who has come to feel great compassion for those struggling with addiction to cocaine, methamphetamine or heroine. Addiction is something she had witnessed close-up all her life.

“I actually moved out of my hometown because it (drug addiction) was pretty bad there and was not a safe place to be,” she says. “A lot of my family are out there, doing drugs. They have nothing going for themselves; no college, no career. None of my siblings finished high school, and that was the reason I pushed myself; to set an example.” Sujey was the only one in her family to strive for something better.

Because Sujey has witnessed so much disappointment and destruction, she locked into an unwavering survival plan. She knew that education and a career she loved was her way out. She also wanted to give that road map to her own children.

“I work so hard to not be that mom who can’t tell their kids to keep going in life and work for what they want,” she says. “I want them to one day be able to see that their mom did so much while she had them, that I never gave up. When I want them to do something, to be someone in life, they see I’m an example of doing that myself.”

Sujey is living every parent’s hope for their children. And her children are watching.