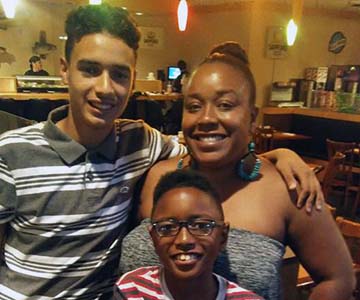 Amber Rose Smith may look like a vision of calm on the outside, but she is quietly juggling a life that demands her full attention at all times.

She runs at a pace set by her determination to succeed in her Licensed Vocational Nursing-to-Registered Nurse program on the Visalia campus while she works part-time as a vocational nurse and is full-time mom to her two sons Noah (16) and Sylas (12).

It wasn’t enough that she had earned a Liberal Arts and three Associate degrees and was a Licensed Vocational Nurse and Surgical Technologist. Even after working in the medical facility of a county jail with a population of over 3,000 inmates, treating suicide attempts, those wounded in altercations, heart attacks and inmate mental health crises, Amber wanted more. Advanced education, higher career.

She also wanted more for her boys; an educational effort and career outcome that would inspire them, as they inspire her every day.

“I work hard every day to be the best mother and student that I can possibly be,” says Amber. “This struggle is one that will make me a better nurse and mother, and I know that at the end of the day, my children will know that their mother is a fighter and this fight is for them.”

The bridge program on the Visalia campus is designed for those who want to make the leap from LVN to RN.

“It is very intense because it is condensed,” says Amber. “I like the fact that it’s fast-paced, and I really like the preparation that it gives you for the field of nursing.  I was blessed to be admitted into this new program.”

Amber has embraced the full load of study, practice and focus her program demands and has been the recipient of some unexpected recognition along the way. Her peers elected her President of her cohort of 24 students. “That was one of my favorite moments,” she says. “I lead meetings that plan our pinning ceremony and I’m in the loop for communication with staff meetings and teleconference calls with all of SJVC’s nursing program presidents.”

Another boon to her efforts was receiving the David Viancourt Memorial Scholarship award of $1,500. Amber applied for the scholarship by submitting an application, current transcripts that reflected her 3.9 GPA, and an essay on why she wanted to be considered for the award. In her essay, Amber writes, “My children are my inspiration as I strive to be theirs.”

Amber’s Devotion to Parenting While in School

Amber, Noah and Sylas lead a full and busy life that is occasionally punctured by medical interventions for Sylas’s epilepsy-triggered seizures that are now under better control. These are associated with an earlier brain disorder that affects his fine motor skills. Past surgeries – 27 of them – rehabilitation and therapies have progressed to a greater state of stability. “He is a little trooper,” says Amber. “He’s the strongest kid I know.

“Noah is very helpful,” says Amber. “He has all his assignments in on time and has all As at this point. He also helps my little one out when needed. He’s just amazing.”

Amber has created a home/school/life rhythm that keeps it all in balance. “Taking care of children, one with special needs and one playing on a nationally ranked competition soccer team, while being successful in the classroom is a struggle,” she admits. “But it is a struggle that is mandatory.  I would not be here without them.  They are the reason for everything I do.”

On Her Future RN Career Ambition

Amber wants to go where the action is, and that action is being a flight nurse with an emergency medical helicopter team. She wants to lift off and into hard-to-get-to places to provide medical attention and transportation to those for whom an ambulance is too slow or terrain-prohibitive.

“I really like trauma situations and high-pressure things like that,” says Amber. “I’d like to go where it’s very critical to get somewhere faster than an ambulance or an area where an ambulance cannot access. A helicopter can take you in and you can stabilize them on the way back to the hospital.”

Amber believes she is in the right place to prepare for that kind of job.

“That’s the skill set I’m acquiring here at SJVC that would make me perfect for that kind of situation,” she says. “In my clinical rotation at the Emergency Room I was put into the red zone, where the most critical patients arrive. I was able to assist in reviving and stabilizing a patient that arrived in respiratory and cardiac arrest. They felt I had the skill level and knowledge to be on that team.”

She feels it was also a reflection of SJVC’s reputation for the quality of their medical programs. “It’s the fact that the hospitals respect SJVC as an institution that they would put me in that red zone,”
she says.

Amber admits to feeling that adrenaline surge that pulsates in a potential life-and-death intervention. “In those situations, there’s a life in your hands, and you have to push everything else aside and handle your business and be completely attentive to your patient.”

A career as a flight nurse would provide many such instances and would keep Amber at the top of her expertise. “When you stop getting a little of those butterflies in your stomach, you need to be aware that it might be time for a change,” she says.

She never loses sight of the example she is setting for her sons. “I want to show them you can reach for your dreams, even if it is difficult. You just have to give 100% effort.”

They have a clear vision of exactly what 100% looks like.