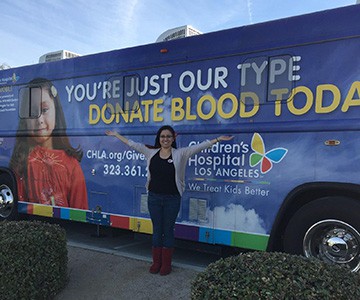 Students, staff and faculty at the Lancaster campus recently made very personal donations: Their blood.

On December 6th, Children’s Hospital of Los Angeles sent their mobile unit to the campus in hopes of collecting at least 20 units of blood from which they would extract plasma and red blood cells. The campus was ready for them.

It all started when 2014 Clinical and Administrative Medical Assisting graduate Sarah Moralez contacted Ashley Diaz, Campus Administrative Assistant, on the school’s Facebook site and asked about their interest in hosting a blood drive.

“I remembered blood drives being a part of SJVC’s activities and students usually are interested in things like that,” says Sarah, who is a Patient Care Technician at a hospital in Valencia. “Ashley got approval and everything fell into place pretty quickly.”

Ashley jumped into action and put together fliers advertising the event, and signed up student donors during the 6-8 weeks prior to the blood drive event. Students were encouraged to invite friends and family members to come and make donations, too.

“We arranged to have an SJVC information booth out there as well, with faculty to answer any questions about any of our programs,” says Ashley.

The blood drive started at 8 a.m. and finished at 2:30 p.m. Sarah and Ashley were the first in line to donate. “We were so eager to make this happen before Christmas and New Year’s,” says Sarah. “So many families will be touched by those donations. What a perfect gift they will receive this holiday season.”

“Children’s Hospital was only anticipating about 20 donors – that was their goal,” says Ashley. “We actually had 30 people attempt to donate, and 21 were able to. We had not only our students and staff participate, but had people that just saw the bus when they drove by and would stop and donate.”

Donating blood is a fairly easy procedure and donors are made comfortable while making their contribution. “Only one person passed out,” says Sarah. “She was a former blood donor and said she does that every time. It was not as big a deal as someone might think and only lasted seconds.”

Children’s Hospital was happy to have surpassed their goal – if only by a single donation.

Two other nice things happened that day, as well.

Sarah got to spend some time with student donors who are in the CAMA program. “They were close to externship and probably a little nervous about it, so I asked if they had any questions,” she says. “Confidence is pretty important, and I was pretty confident in my externship and when I went into my first job. And, it seemed like they were too.”

The blood drive was also an opportunity for the Lancaster campus to strengthen ties to this local major hospital. “We made a good connection with the hospital and will do these events on a quarterly basis,” says Ashley. “For future events, we will be coordinating for students who donate blood to go down to the Children’s Hospital for a tour of the facility and actually meet with different departments about career opportunities: Billing careers, medical assisting, pharmacy and business careers.”

Those connections only add to the primary success of the day. Those 21 donors provided 63 units of much-needed blood products that Children’s Hospital would otherwise have to buy from the Red Cross.

The campus blood drive even made the evening news. “I have the news clip of Sarah being interviewed and can see our SJVC banner in the background,” says Ashley.

“All the students I spoke with were happy to make a contribution and help children in need,” says Ashley.

“That’s right; we saved 63 little lives,” says Sarah. “Thanks to all of you at SJVC, times a million!”

The next Lancaster campus blood drive is scheduled for March 28th.