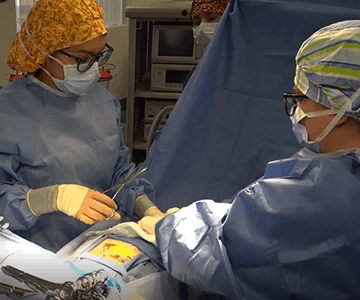 Medical program students on SJVC’s Temecula campus broke out of the controlled environment of hands-on training in labs to taste a little “real-world” action during “Hospital Day” recently. Students from SJVC Temecula’s Criminal Justice Corrections, HVAC and Business programs got to exercise their career skills and acting chops as well.

“The entire campus was turned into one big mock hospital, simulating wellness appointments, collapsing patients, failed HVAC (Heating, Ventilation & Air Conditioning) system, a C-section delivery, a mass casualty and even a stolen newborn,” says Tanner Bliss, Respiratory Therapy Program Director, who spearheaded this massive exercise. It was simulated chaos – just as any hospital, emergency room, or medical facility can become at any time. And the perfect environment for students to test their skill and knowledge.

“We had Medical Assisting students doing assessments in the lab and blood draws, while Medical Office students were doing both front and back office procedures,” says Tanner. Surgical Technology students assisted in the cesarean section on a mannequin, while HVAC students responded to a gas leak that was causing mass casualties.

The scenarios were very diverse. “Criminal Justice: Corrections students [acted as] corrections officers who were taking a couple of inmates in handcuffs and leg irons – who were very combative – to the hospital; and they scared some of the students working on them,” says Tanner. “Those Corrections students acting that out were very good at that. One got tackled to the ground and required physical restraint.”

Some of the best career training opportunities came from unplanned medical crises that a few student and faculty participants threw in just to keep things on the edge. A Code Blue is called when someone stops breathing or their heart stops. “There were a handful of Code Blues planned, but there were a lot more called,” says Tanner.

“There was a spontaneous Code Blue and I was within earshot, so I had to respond,” says Steven Weick, a Respiratory Therapy program student who had played a patient with shortness of breath in the morning session and Emergency Room co-manager in the afternoon exercise.

“Once I got there, this person collapsed, wasn’t breathing and had no pulse,” he remembers. “They asked me what I was supposed to do next. I was the first to do simulated compressions on a live student on the floor. Then they brought in a mannequin to take the place of the student, and I started doing chest compressions until several students showed up to relieve each other. We got the mannequin on the gurney to go to ICU, and the instructor gave feedback. I realized just how tiring it can get. A couple of minutes is a long time.”

It was an important experience for Steven. “I was surprised at how fast-paced it is; you’re not necessarily going to twiddle your thumbs in this kind of position. It was going from one patient to the next and sometimes having more than one patient at the same time. But I felt in control and confident, and well prepared.”

Many patients were in the mock emergency room due to exposure to refrigerants, or they had electrical burns from a simulated failed HVAC system. Many ‘victims’ required CPR in the hallways before being transferred to the ICU. “There were a few that didn’t make it,” offers Tanner.

One of the more unusual scripts called for hospital response to a stolen newborn. A female student volunteered to wait for just the right moment to grab up the baby and run down the hall. “A Code Pink in a hospital means a missing baby or child, and security is quick to respond,” says Tanner. “Corrections students acted as Security and they got there quickly to intercept and arrest her.”

Every possible scenario, both planned and unplanned, unfolded throughout the day. “We were given a script for patient behavior, how they were feeling and how they would react,” says Cindy Miller, Respiratory Therapy student. “But it wasn’t like pairing up with lab partners. We had no idea how they are as a person, and the situation is more unpredictable.”

Cindy was challenged by the unknown elements. “It was a real-life experience vs. PowerPoint, and we were getting curve balls thrown here and there.”

She, too, played both a patient and a Respiratory Therapist throughout the day. Between acting out symptoms of a patient in distress and evaluating symptoms and appropriate treatment, Cindy successfully faced all challenges thrown at her. “My adrenaline was going, but I felt my classmates and I were very well prepared for what was going on.”

They also had plenty of back-up. “We had senior students who were paired up with us, as well as instructors surrounding us to make sure that everything was going well,” says Cindy.

An emergency room and admitting area was set up on the first floor of the campus with tables set out for front and back office duties. One Medical Assisting instructor was acting as the ER doctor. “She was running the room and based on how the patient presented, would write orders on where the patient should go next,” says Tanner. “Another instructor was overseeing the 2nd floor lab, and some patients went to the dental room for dental work and others were sent to the Respiratory Therapy classroom for in-patient treatment or extended stay. The lab was the critical care area.”

Every possible hospital department was simulated and staffed. Faculty members who provided direction and supervision included:

This kind of hands-on training is essential to introducing students to the actual pace of their jobs and real-world interactions. “You can’t teach this kind of in-the-moment time management,” says Tanner. “In these situations, there is a lot that needs to be done in a very specific order and in a very fast-paced environment.”

Students seemed to thrive in the intensity of these simulated emergencies. So much so that they are asking that another practice on this scale be held again soon.

“There were a lot of cheeks flushed pink,” says Tanner. “They jumped right in and were having fun with it, while they were learning. Everyone I talked to loved it and wanted to do it more often.”

Tanner and the many program directors and instructors who planned and organized this major experience are on it. They are certain that the next “Hospital Day” will create even more excitement and opportunity to walk in the (staged) shoes of hospital workers.

Posted in News and Events / Temecula