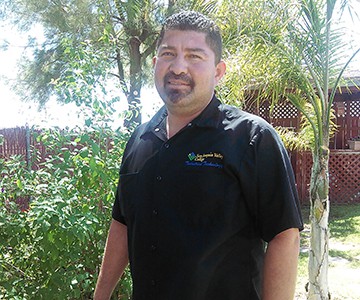 Ricardo drives over 150 miles each day to get to his Industrial Maintenance Tech program classes. He wants better for his family…and he loves what he is learning.

Ricardo Rivas’ job as Equipment Operator at a food manufacturing plant had him doing a lot of industrial maintenance work. But he was not getting the pay bump, because he lacked specific training and certification.

“At work, I was doing a lot of the maintenance, but I wasn’t getting paid (at the Industrial Maintenance Tech level) because I didn’t have no certificate,” says Ricardo.

Ricardo caught SJVC’s Industrial Maintenance Technology (IMT) certificate program commercial on TV one day and decided to do whatever it might take to get what he needed to earn certification and that advanced job title and income hike. He enrolled in the Fresno program and began a schedule that might have caused many others to turn right back around.

While Ricardo continues to work full-time days, he makes the hour and fifteen-minute commute – each way – from Los Banos to Fresno every Monday through Thursday. He gets back home at midnight, then starts the next day at 5:00 a.m. to pull another 9- or 10-hour work shift.

“Sometimes I’m tired just thinking about it,” says Ricardo. Fortunately, he gets lots of support at home and at work, where his employer helps pay for his education based on his grades and successful completion. The company even adjusted his work schedule to meet his Industrial Maintenance Technology program hours.

Ricardo’s wife Gabrielle and their sons Giancarlo (11) and Ricardo (8) show their pride in his commitment to a better life for them to share. “They make me feel very good about myself,” says Ricardo. “I don’t want my kids to see me dropping out, and someday, hopefully, they will be doing the same thing.”

Their faith and his ambition paid off.

“Ricardo, like most of my students, is a very hard-working individual who is eager to learn and has a fantastic attitude,” says Industrial Maintenance Technology instructor Christopher Barger. “He drives 156+ miles a day and has been here every day and is doing fantastic academically.”

Mr. Barger has a story about Ricardo’s commitment level. “Ricardo got sick and contemplated missing school for the first time.” Ricardo and Gabrielle came up with a plan. She drove him to school, then killed five hours of class time before picking him up at 11:00 p.m. to drive home. “I’m extremely proud of Ricardo’s willingness and determination to be successful in school, and he brings the quality of students up in my classroom,” says Barger.

There is a reason for Ricardo’s devotion to his Industrial Maintenance Technology program that goes beyond career advancement, self-pride and a better life for his family. He truly enjoys what he is learning in class every day.

“I like being there, and I don’t want to miss anything,” says Ricardo. “I had a little bit of knowledge, but now I’m learning a lot more things.”

Ricardo admits that, before class, he didn’t know very much about “electrical, and why things work this way. Now it makes more sense,” he says.

He has also learned a lot about Programmable Logic Control (PLC). “It’s a program, like memory for a conveyor system, that tells it how fast to run and when you want it to start and stop,” he says. “Once you program it, it’s going to do whatever you want. You can run a whole plant with this.”

He is intrigued with schematics. “I can read a schematic now. It’s like a map that shows you how to get a machine to run and how every component works together.”

The classroom is his playground and each lesson his newest toy. “I was surprised that I learned all of that stuff,” he says. “The way that Mr. B (Chris Barger) would teach it and explain, made it easier to understand everything.”

Ricardo does not have to be in class every day; he wants to be in that classroom. “I want to learn all I can every day. The hardship is worth it.”

Ricardo will complete his Industrial Maintenance Technology program in a couple of months. What next?

As the first in his family to go to college, Ricardo has high expectations for the outcome of the sacrifice he and his wife and sons have made.

“I see myself running a maintenance shop or being a Plant Manager, even. It opens the door to more job opportunities and I want to make this something bigger for me.”

For all Ricardo envisions for his future, he can get by on five hours of sleep each night for just a little longer. His kids can see beyond their tired dad and find inspiration for their own lives. “Maybe they will work a little harder in school because they can say, ‘Hey, my dad’s going to school,’” says Ricardo.

Ricardo is good with making a big sacrifice right now for all he sees ahead. No one doubts he will take all he has learned to the top of his newly acquired expertise.